Nidhi Sunil for Dazed Beauty: Colourism and being in an industry that favours fair skin

Nidhi Sunil for Dazed Beauty: Colourism and being in an industry that favours fair skin

My first instinct when I’m asked to discuss colourism and its effect on my life has always been: ‘How do I articulate this so that the crux of this conversation doesn’t get lost in rhetoric?’. I want humans to release the regressive perceptions that surround us regarding how we look and choose to feel powerful for reasons other than fitting into some general narrative structure of beauty.

How does one sum up what it feels like to be discriminated against for something that is your genetic heritage, something you can’t change? The only word that comes to mind is painful. It was painful. Shout out to the guy that nicknamed me Kaalia (Blackie) the crow in high school; I love you for sending me on my journey.

Growing up in India, it was disorienting living in a country full of dark people, but to be surrounded by information that insisted that under no circumstances were you to consider yourself acceptable to look at. We are a nation of arranged marriages, dowry, and a rabid obsession with fair skin. Although I was lucky enough to have a mum who was wise enough to keep her kids away from bleaching creams, my run-ins with the outside world and my extended Indian family were not so fortunate. I remember going to a second cousin’s wedding and one of my aunt’s summing up my eligibility as a future bride: “Pretty, but would have been better if she’d been blessed with her grandmother’s complexion.”

I’m unsure about when and how the perception that ‘white skin is better’ became so deeply rooted in my culture. Though after living and working outside of India I’m pretty convinced that it’s not just an issue native to South Asian culture – though it takes on different forms in different countries. In conversations among my Indian friends, we often joke about our obsession with fair skin being a colonial hangover.

From extended family members taking an acute interest in the tan-free, blemish-free state of your skin for potential future marriage arrangements, to being inundated by billboards and TV commercials propagating that you can forget about winning at life if you’re dark – the message is hard to avoid. That’s without mentioning classifieds in the marriage section asking for fair brides for engineer sons, to the large majority of A-list Bollywood actresses being fair and pushing fairness products.

As a young teen growing up in India it was sort of a foregone conclusion that if you were fairer you were prettier. I was a sports kid growing up and my schedule involved training as a swimmer for five hours a day, six days a week. I was a very tanned dark kid. My mum, who was very dark-skinned, much darker than me, constantly drummed into me that I was beautiful. It must have worked because if I had just my high school teenage experiences for context I would definitely have a complex about my skin. But, as I mentioned, my nickname in high school was Kaalia the crow.

It’s almost like we’re brainwashed really… you don’t even question it as a kid. Fair skin and light eyes were just the epitome of beauty. I had this weird fantasy of growing up and dyeing my hair red and sticking in green contact lenses. We prefer light eyes over our brown ones. I have even used a bleach cream on my own skin before realising it’s a waste of time and was probably horribly bad for me.

I was signed to an agency in India when I was in university; I competed in a model hunt between semesters and placed second. One of the prizes was a modelling contract. The judges were photographers and creatives in the industry, but the bookers at the agency were unhappy about me having freckles and what they called an “uneven complexion.”

I was asked if I’d be open to laser surgery to get rid of both; the recovery time is an entire month indoors, totally out of the sun. I can’t blame them because the market in India is geared towards pushing girls towards the movie industry, because that is where the big payoffs are (though you still make significantly less than your male counterparts).

If you manage to make it as a successful model, the natural next step for your management is to work on getting you a movie and fair skin plays a very large role in deciding whether you can be a mainstream commercial actress or not. There are obviously a lot of moving parts to this once you have the basic physical requirements, but truly, the public in India holds up fair skin as beautiful.

I did a lot of test shoots… a lot. Then I ended up doing editorials, but getting paid to do commercial shoots was always challenging. I signed in New York in 2015 and working abroad is a different kind of dissonance. It was really obvious straight off the bat that you were more likely to do fashion, runway or editorial if you were a skinny caucasian girl.

I was regularly cast for jobs with commercial brands where I was the only brown girl in a cast of 14 other models. I still do honestly. While there’s no doubt that there are people across the industry pushing for diverse casting, you can’t help but get the sense that they’re hoping you’re the particular colour of foundation they’ve already figured out a shade for. Everybody else is going to have to wait longer for a seat at the table – assuming there will be one at all.

I have a love-hate relationship with social media. I think everybody does. But you can’t get away from the fact that with regards to social issues it’s been hugely helpful to bring like-minded communities together. A place for people who are struggling with what would previously have been isolating personal circumstances, to find role models and peers.

Modelling is such an interesting job. Personally, I’ve found that it has made me distinctly aware of how strategically beauty is packaged and sold. In a strange way, in my personal life, it has made me switch off entirely from connecting grooming and good looks to how attractive a person is. The social construct with regards to our perception of extrinsic beauty is so narrow that it makes young women (and men) believe that they are, fundamentally, not enough. At this point, I feel beautiful when I feel like I’m being authentic and sincere in my expression, and taking care of my body without putting pressure on myself to fit any mould, and quite honestly when I’m just having a good time. 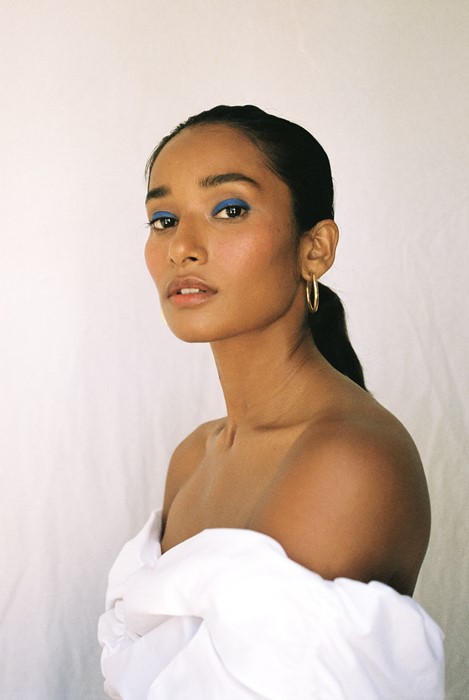