Fashion muse, diversity campaigner and champion of every woman’s right to be different, Amber Jean Rowan is making history on her own terms……

I should prefix the interview with this: Rowan is a very impressive young woman, with a wisdom that belies her brief time on this planet. You would be hard pressed to find a fellow human being who doesn’t find Amber’s tale truly inspiring. And – for the record – she’s not just telling the Instagram version.

Naturally, it wasn’t all sunshine and roses: for anyone, let alone a self-conscious teen of 15, an alopecia diagnosis would serve as a devastating blow. “All-girls schools can be tough,” she concedes. But instead of feeling isolated by her peers, she sought solace in her tight-knit group of friends. “Even if other girls said a couple of nasty words behind my back, I had my friends and I felt safe.” Neatly quipping: “If I hadn’t had my core group of girlfriends around me it would been an absolute disaster.”

I can only imagine how hard it must have been to suddenly go from a quote, unquote normal girl to a creature whose status is ‘the other’, however Rowan is very accepting. 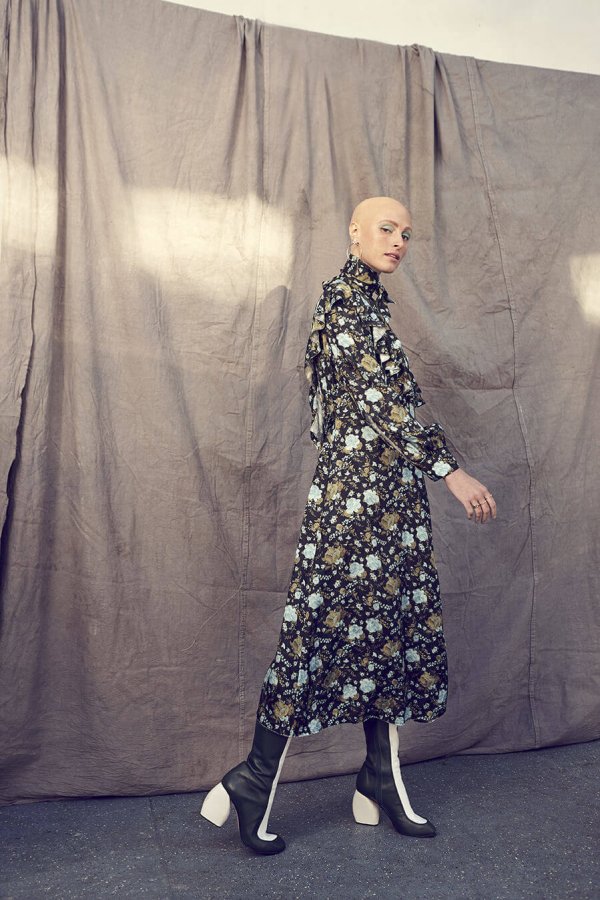 “It’s not something people are used to seeing, so it’s only natural that someone would look a split-second longer than usual.” For Rowan, the biggest misconception around alopecia is that you are seriously ill, or dying.

“When we think of a person with no hair… our mind automatically thinks ‘that person must be ill’ as no images of bald women are in the public eye,” she explains. Her own experiences notwithstanding, this is sure to strike a nerve with many men and women. Culturally, a lack of hair in men brings to mind masculinity, a rugged toughness or a ‘hard guy’ persona. If a man is losing his hair to hereditary baldness, it is more socially acceptable – however hard it may be – that he may shave his head. Women who are ‘follically challenged’ are not granted the luxury of such catharsis.

“By nature, we are not used to seeing it and are quicker to judge,” she finishes, as the makeup artist touches up her naturally dewy skin. It contains such perfectly formed freckles, you’d be forgiven for thinking they were painted on. (For the record, they’re not. Rowan does choose to sketch on those awesome eyebrows, pictured here, every morning. That’s dedication, I tell her.)

The youngest of a family of five, Amber grew up in the Dublin suburb of Clontarf, her father is a business consultant, and her mother retrained as a psychologist a little over a decade ago. It’s this solid grounding that she credits for adjusting to her diagnosis so well.

“Family, of course, were number one: they were there, supporting me. Every doctor, every treatment, every form I had to fill out.” Such support was an invaluable guiding light during those formative years. “When I would come home from school in the evening I would be upset or I would be confused about what was happening, they were there.” 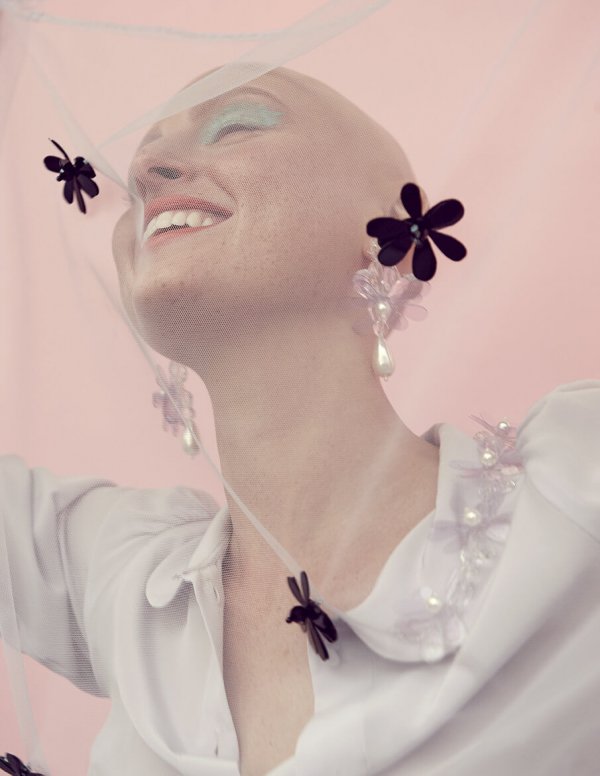 On that matter, let’s clear up a few such misconceptions. Amber prefers not to refer to alopecia (full name alopecia areata) as a disease, rather an auto-immune condition. More precisely, a condition whereby the immune system attacks the hair follicles, resulting in the hair falling out in round patches – both on the scalp and elsewhere on the body – leaving a trail of hair loss in its wake. As it stands, doctors are vague as to whether Amber’s hair will ever grow back.

Today, that means her entire body is hair- free. The upside is she doesn’t have to shave, or pluck her eyebrows. (In fact, the only place where she occasionally grows hair is her underarms.) Getting her first wig was a huge breakthrough: “I remember the feeling of going over to London and getting my first really amazing, expensive wig from Lucinda Ellery, I felt like a new woman.”

Acceptance is an omni-present and ever- evolving beast. While this isn’t the first photo shoot she has done without her wig, Amber is not at the stage where she would simply walk down the street, wig free. “I’ve done a couple of shoots with some photographers, people I know. They were kind of just for me, more than anything else, they were never publicised.”

Thankfully, the bitchy fashion moments have been non-existent. “I was always afraid that it might be a case that I’d rock up to a shoot and it might be an issue, but it never was.” She credits having a good modelling agency for that. “Chatting away to the hair stylist I would be totally comfortable. But if they were to say, ‘Oooh we’ll do a shot without your wig’. I would have said, ‘Not in a million years’. My confidence wasn’t there, I wasn’t ready to embrace that side…I didn’t think it was beautiful.”

“I felt me when I went home at night and I took my hair piece off and everybody would see me. I was comfortable with that, but I still wasn’t comfortable to share that or have that part of me be photographed.”

Citing one of the few times she removed her wig in public, on holidays with a friend in the intense midday heat. The pair were sitting in a café, but following a few uncomfortable looks she decided it was a stage she wasn’t ready for yet. “It’s all a work in progress,” she says with a light smile: there’s that nerves-of-steel attitude.

A move to London five years ago has seen Amber build a happy life. Her boyfriend of two years lives down the road so they hang out often. A recent holiday to Ischia saw them get spur of the moment tattoos. His, a beautiful Italian phrase; Amber’s some dainty lines across her knuckles. Her other tattoo, on her wrist, denotes a finely-etched compass of sorts.

In spite of being able to go from nought-to- Julia-Roberts within 60 seconds on set for our fashion shoot, Rowan’s career as an actress is of foremost importance, inverting the usual model/ actress moniker to prioritise her dreams of silver screen stardom.

Her recent stint in Nocturnal, a Yorkshire- based film starring Sadie Frost as well as hot up- and-comer, Cosmo Jarvis and Irish actress Lauren Coe is due for release later this year, and has her excited. But it was her role as Eve, a troubled young woman in the Irish made Cellar Door, directed by Viko Niksi, that turned heads. A gritty psychological thriller that follows a young woman in the Magdalene Laundries, Rowan’s appearance is spine-chilling.

In her personal life, Rowan has found helping others cathartic too. Hence, Hair Free Life, her website that aims to be a source of education, inspiration and information for the hair free community which has just launched. “Over the past 10 years of modelling and acting I’ve had women, and men, come to me either via social media or through my agent, asking me the same kind of questions: Where do I get my hair pieces from? What makeup do I use? How do I deal with it?” Rather than being intimidated, imparting her wisdom seemed like a natural progression: “I was finally ready and at the point where I was the happiest I’ve ever been in my life. The most comfortable I’ve ever been in my life.”

Does fashion’s new ‘trend’ for diversity ever strike her as a little disingenuous? She isn’t taciturn, but definitely cautious. “I guess the fear is that it’s just token and it is just a trend or something flash in the pan. But I really do believe in the good in people…hopefully we’ll look back and celebrate now as at time when people’s ideas really were changing”

The lesser-known ending to the Brothers Grimm tale of Rapunzel recounts that when the evil witch cuts the princess’s hair off in spite, throwing her out of the tower to fend for herself, Rapunzel loses the prince but pulls a Destiny’s Child-worthy Independent Woman move, raising her two children alone in the wilderness. Just like the compass on Rowan’s wrist, I have a feeling that a woman like Amber will never be far from finding her centre. 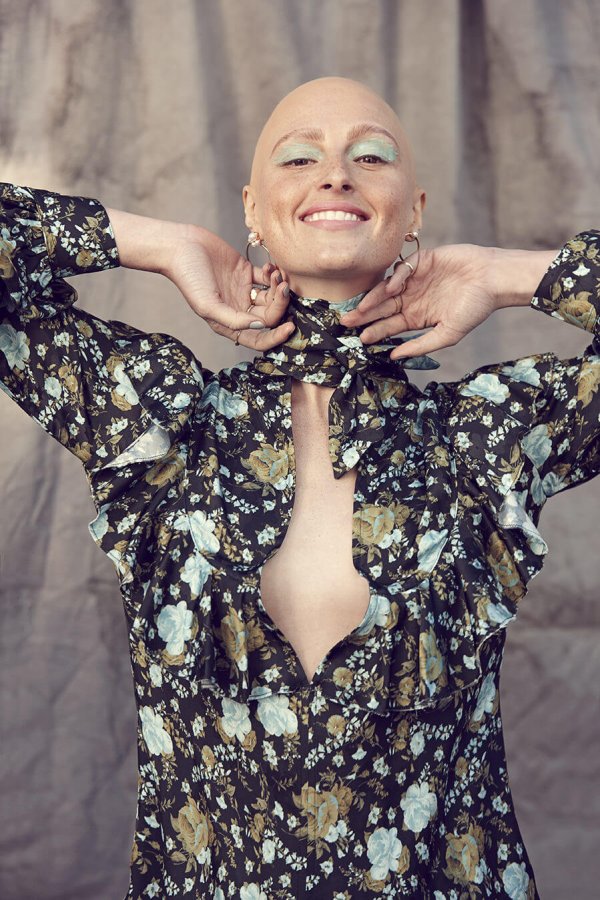